The Wonder of Aztalan 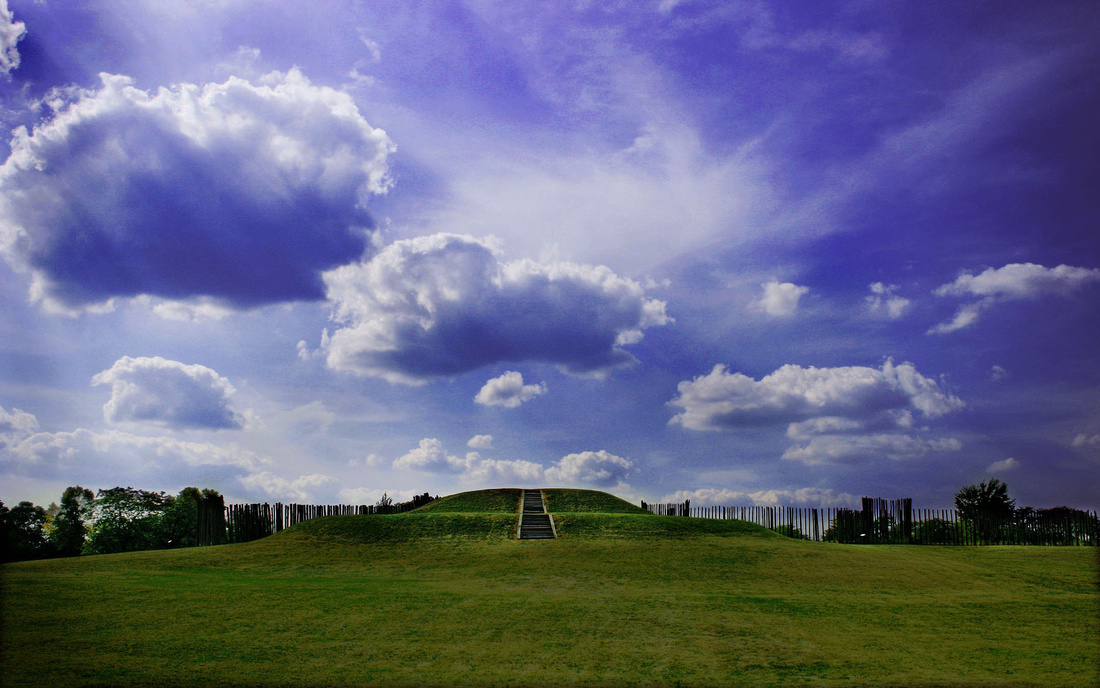 Still today I remember the legends.

Tales told between school kids of a mysterious people, an ancient people, very similar to those we saw pictures of when learning of the Aztecs in Mexico. Stories of a long lost civilization living in our state, only to disappear from the earth, leaving their village for us to discover a thousand years later. Stories of war, stockade walls with lookout towers rising twenty feet in the air, pyramids, and even, dare we say, cannibalism. All of this… right here in Wisconsin?

Growing up in the Fox Cities, I never did get to take a school trip to this mystical place. Students only heard passing references to it by our teachers, stimulating our imaginations to flow in absolute wonderment.

Aztalan, as it is named, is nestled on the banks of the Crawfish River in Jefferson County. It is truly a site needing to be seen to be believed. Could all these tales I heard of as a kid be true? Pyramids like the Aztecs? Lookout towers? Ancient temples?

This past fall, I grabbed my camera and went to find out for myself.

Located a bit further west than halfway between Milwaukee and Madison, a short distance off of Highway 94, lies the town of Aztalan, in which resides Aztalan State Park. The town is also home to the Lake Mills-Aztalan Historical Society Museum, which boasts several original structures dating back to the mid-1800s.

After browsing through several of the buildings, including several cabins, a school house and general store, I made the very short drive down Mound Rd. to visit the reason for my excursion.

Slowly coming up to Aztalan State Park I was in 6th grade again. That butterfly feeling you have as a child while quietly sneaking up to a house you heard was supposed to be haunted was running rampant in my gut. All the legends and stories I imagined as a curious but impressionable school kid were reverberating in my head.

Then, I started to see the mounds. A row of small, round, conical mounds could be seen rising up in the grass. The butterflies became more prevalent.

After pulling into the park entrance and following a winding road further in, the legends suddenly became real. Stockades were soaring into the sky! After parking the car and seizing my camera gear, I made my way towards those stockades, the late afternoon sun producing giant black shadows on the ground behind them, adding to the already imposing feel of the tall, timber-like structures. Once inside them, I saw what they were protecting…pyramids! Large, platform pyramids, much like what I used to see in history books about the Aztecs. One pyramid had steps leading to the top. I was paralyzed for a moment as I attempted to envision all that had occurred on top of that pyramid. Sacrifices? Religious ceremonies? Burials? I had no idea. I looked around in bewilderment as I remembered once again the horror stories I heard of war and cannibalism at this site, though I could only hear one thing - silence.

Only the occasional bird or wind gust could snap me out of the imaginative movie making going on in my mind.

Also gone was the larger-than -life, exaggerated version of this land and it’s people I knew as a kid.

Standing there, in the middle of the village, reality took hold and respect set in. It looked small. I felt ashamed. Standing there, on what once was the village plaza of a people I once looked at almost as a charachature, I gazed upon what used to be their burial mounds. I watched the grass bend in the wind on the pyramids on which most likely stood their sacred temples and houses. I listened to the current, so very slight, of the Crawfish River, where I knew they fished for food. I envisioned the stockades, now crude reconstructions, fully intact, three times as high as they stand now, and covered smooth with fired clay and painted ornamentations.

Approximately 900 AD was the first time this village was inhabited. Woodland people, those who built the effigy mounds so prevalent throughout the state, initially built a small settlement here. Some time later, around 1000 AD, the village was transformed by visitors from the Middle Mississippian culture who were from, or descendents of those from, the famous city of Cahokia, the Mecca of the Mississippian people. Cahokia was a monstrous ancient city of temples, plazas, and huge earthen mounds located along the banks of the Mississippi River close to present day East St Louis, IL. As Cahokia grew, it’s people expanded outward, establishing their own villages. Many moved north into northern Illinois and Wisconsin, and hence, into Aztalan. The small Woodland village morphed into a miniature Cahokia, boasting large earthen platform pyramids, stockades, and a plaza, which held community rituals, ceremonies, and gatherings.

Archeological evidence at Aztalan shows it thrived during a very violent time in our history. War with other tribes was frequent, as was human sacrifice and, in some cases, cannibalism. It was not uncommon throughout various tribes in the Americas during this time for war captives to be cannibalized. It was thought that this was how one could retain their enemies courage and valor. Human bones found in garbage pits with other discarded food sources demonstrates this activity likely occurred at Aztalan. There are some who use this to define those who lived at Aztalan as a sinister people. That is a travesty. They are mistaken.

As a photographer conducts their craft, they are forming for others a perception. Be it a portrait, a landscape, a household product, etc., they are shooting to portray a semblance made in their own vision. While driving to Aztalan, I envisioned shooting images of a very dark and mysterious nature. Images which would demonstrate the enigmatic yet ominous mood I remember feeling as a school kid talking about the secrets of this lost land.

I left without taking any of those photos.

Rather, the photos I wanted to take were the photos of how I felt the inhabitants would want us to know them today. Not as a black-hearted, war-happy people, but as a community of families, brethren, craftsmen, hunters, men, women, and children.

They lived in different times. We need to accept that.

Around 1200 AD, the inhabitants of Aztalan disappeared and the village was burned.

We don’t know why.

For centuries, it lay as it was left, untouched by human hands until American settlers accidentally walked upon it in the 1830s. The first accounts suggests some of the stockade walls were still standing - over 800 years after first being built! It instantly became a national headline. The finding was so extraordinary, some believed it must’ve been a hoax. Due to it’s visual similarities to the Aztecs, and even incorrectly linked to them by some, the site was named Aztalan.

Sadly, in 1838, an egregious error in judgment by then President Martin Van Buren resulted in the site being sold for $22. The land was plowed and priceless history was lost forever. Modern efforts to preserve the site began in 1919, archeological surveys were conducted, mounds and stockades were reconstructed, and finally, Aztalan was named to the National Register of Historic Places in 1966 and lives again for us to learn from, and remember.

As this hidden jewel is largely maintained by donations, I strongly recommend a visit. Once there, you may realize much of the haunting and menacing narratives you may have heard or read in the past will be disproved, but believe me…